A downloadable game for Windows

What is Plants vs. Zombies It's Versus Time?

What devices and controls can play the game?

Can the game be played online?

What is the differences between the maps?

It's cool, but kinda buggy and unbalanced

at least write some examples of what you want to fix.

2)gargantuars can spawn imps on the adjacent lines

3)after planting a solar grave when you plant a basic grave, solar appears

4)I can plant speakers on graves

5)I can plant speakers on speakers

There are a lot more of them, but nuh, I'm too lazy

2. What is supposed to happen.

2. I have never seen that

3. was a kind of nerf to that strategy(intentional).

4. 5. Speakers count like graves. when you put a grave over other grave the one with less health is destroyed.

it is good, but the zombies are very strongers..

bro which one do i download there are 9 different downloads

this game is the stupidest game I ever saw

VERY GOOD love the pixel art and the discord community is very nice and helpful!

My goodness the game was so fun!

pole can jump anything

Zoy bean is cursed, you can plant another plant on top

swash buckler too fast in swing

king zombie goes into the bushes when thyme warp is used

two pilots spawn at once even tho its only one

zombie with acid head too op

caller zombie with mic too op

Kidding when i said small

thanks, i'll be fixing them, what do you mean by caller zombie with mic?

I dunno, the zombie with the microphone that spawns imps. I honestly forgot it's name

yes, i will fix it soon

absolutely love this! always has been a pvz fan, seeing this makes me very happy

i hope it can run on 32 bit system

is it possible to play with a keyboard as player 1 and a controller as player 2?

No this project is only for windows never will be exported to other plataforms.

can you make this available for Mac

i had a window but i got a new mac

Will you release the mobile game? only with online mode

go to the discord for suggestions

Enter the discord to comment on it, I only accept requests out there.

Imbalacend, when i played with my friend, plants always won, but maybe im just bad ü

Is it possible to play without downloads?

what do you mean?

I want to ask how to connect between 2 pc from afar? Me and my friend can't find each others' room and the list board is always empty

must have the same version

Reply
I am a dumb dumb121 days ago

Give all plants and the zombies Pixel outlines

what engine did you guys use. Just curious.

It's on the page, Clickteam fusion

thanks didn’t know that it was there

I really like the game, but the amount of jank and the state of balance NEEDS to be fixed.
I also recommend working on Dark Ages (maybe even prioritize it over fixes idk) since absense of any shrooms makes aggro zombie decks really strong and unfun to play against. Simply spamming defaults and imps is way too strong, but the original versus had a lot of balance changes to accomodate that (for example the Coffee Bean cost was reduced to 25 sun, the Repeater cost was reduced to 150 sun instead of being 200)

Things that are unlike the original (PVZ2):

1. Chili Beans are supposed to straight up insta-kill stuff, not damage it
2. Endurians can only damage two zombies at a time
3. Frozen plants are not ignored by lobbers if the zombies are present on a lane - they should prioritize zombies if they are present on a lane (however maybe leave this one for now?)
4. Plants that are supposed to emanate heat are just not doing so
5. Cherry Bomb not only insta-kills gargs and but also ignores Sarcophagus' armor (his armor is basically a layer, it is not supposed to be JUST some additional hp like the Buckethead)

Balance changes I can suggest:

1. Tomb Raiser needs to cost more, not sure how much though
2. Zombie side NEEDS to have 5 targets instead of 3 like in original versus mode - otherwise not only does Zombie side require less to defend but also it can divert Plants side's attention on lanes 2 and 4 knowing it will just waste their resources
3. Maybe make the Golden Leaf cost 25 sun? I don't know if this is a good change but for now it will at least allow a bit more power against aggro decks if development is going slow

1. Potato Mines SEEM to sometimes trigger from and deal damage to zombies on adjacent lanes - not sure how to recreate it tho and I should've done more testing
2. Football Mechs eat stuff while pushing, hence they can eat the Chili Bean or Endurian and be damaged by them (also that is how i found out that Chili Bean does not insta-kill - the mech did not die after eating)

There is a lot more stuff I want to write but right this moment I can't. However I can write more tomorrow.

Yes, quite of these failures or balances are already under discussion, I recommend you to enter my discord.

Cool game, and thanks for still giving support for windows xp, the game need some performance fix, anyways i found many bugs & unbalanced things, here's em:

Peashooter :need more faster fire-rate, because can be eat by imp when first round (other plants too).

Cabbage-pult :didnt do any damage to tombstone. Also cant catchup with imp speed (because imp is still op).

Bloomerang :why only shoot within 9 square? In pvz2 it doesnt do like that, also the boomerang didnt get back to him.

Bonk-Choy :didnt do back face when slapping zombie behind him.

Snow-Pea :when hitting zombie, the zombie didnt get blue.

Snapdragon :why shooting if any enemy is 3 block away from him?

Squash :can be eaten & die (if too much damage dealed) when flying. bruh.

Torchwood :main hp is too much. Didnt exploding when die like jalapeno (pvz2 do this), snow-pea became fire when shoot through. Split-pea cant shoot backward through it, it became forward.

Chili-bean :do damage to zombies in 1 square after being eated

Chard-guard :can hurl tombstone. After 2 hurl he is just stand still.

Rotobaga :didnt deal damage as much as a normal pea does

Hurrikale :very fast slow effect, even after the zombie being pushed back the slow effect are gone

Pepper-pult :same as other pult cant do damage to fast moving enemy

Stunion :didnt fire burst of stunging gas to 3x4 area, just in front of it & doesnt do burst animation

Coconut-cannon :need more damage. In this game you need 5 this type of plant to kill single gargantuar but in pvz2 you just need 2 of it

A.K.E.E :cant do damage to any zombies, even on a zombie base (idk what is name)

Toadstool :after being planted when there a zombie in front of him, he need a secs before eating it.

Lava-guava :do hit & dont die immidiately making he has 2 hp

Grave-buster :invicible & do nothing because grave are on right side which plant cursor cant go

Laser-bean :only damage 8 square ahead. Fire speed is too slow.

Gatling-pea :barrel on his mouth only can be seen when shooting

Thats for now. Thanks & sorry for bad english :p

Man, im not spanish guy, im from another country

torchwood does blow up like a jalapeno in pvz 2, just not pvz 1

it blow when zombie eating it till die

I'm using windows, but I think it would be cool to port this to Mac

other than that this is dope

also u should add flag zombie (maybe one for each world, bringing in their own worlds' zombies)

Have you tried the survival mode?

no, but i meant for the multiplayer too

The sync is not perfect sorry.

its pvz versus, but better, and 8-bit!

what more could you ask for?

no, like, what else could you really ask for?

I wish this could be on phone

Just not is possible.

nice game, online feature make it unique from other versus mode fangames

cool game, has good use of pvz2 in Versus Mode. I see a lot of potential in this game.

On the current version 0.35, the fast pacing of this game is very unique, I like it. Still, there are some bugs that can lead to a frustrating lost, and balance change need to be implemented. Some plants and zombies are too overpowering and others are quite undervalued.

Sure, Which plants do you think need to be balanced?

Seriously? wow I love the work you did with this fangame

This is actually really cool!  Just a problem for me is that the resolution is too big for my screen.

In the next update, you will be able to change the size of the window

Controllers are working now, thanks a lot! Brilliant game, I have been waiting this for pc so long time.

There is one bug what I found; When player of plants try to dig, then zombie-player can't do nothing at the same time - and there is not option to dig for zombie-player at all. 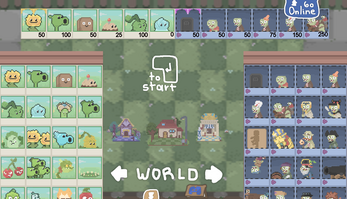 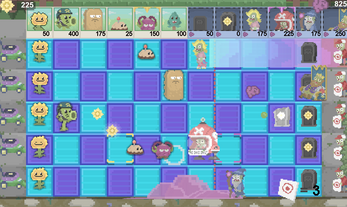 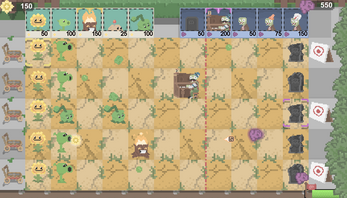 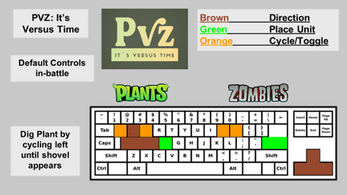